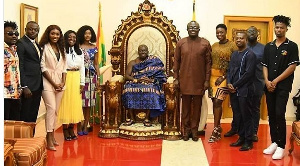 Rufftown Records singer Wendy Shay joined a team from the Youth Employment Agency (YEA) to pay a visit to Asantehene Otumfuo Osei Tutu II.The team made up of YEA’s board, management, and some ambassadors visite the Manhyia Palace on Friday, July 26, 2019. Apart from Shay, the other ambassadors present included Kwesi Arthur, Bola Ray, Emelia Brobbey, Bibi Bright, and Becca Donkor.According to YEA’s board chairman, Sammy Awuku, who announced the visit on social media, it was mainly to introduce the Agency’s new programmes and initiatives to the respected king. “The YEA Leadership used the occasion to introduce the new Flagship Program and initiatives of the Agency to Otumfuo. The Wise King also admonished us not to let the younger generation down. He commended our resolve to help support the Nana Addo Administration with such programs aimed at alleviating poverty and tackling unemployment among the Youth. On our part, we assured him of our determination to see these initiatives through for the good of our youth,” Awuku’s post on Facebook partly read.From photos Awuku shared, Shay dressed decently unlike the last time she and the team visited former President J.A. Kufuor. It will be recalled that Shay recently came under massive criticism for visiting Kufuor in an outfit which many people thought was indecent. After sharing a photo in which Kufuor was caught watching her bosom, the singer quickly deleted it as it caused a stir on social media with a lot of people blasting her for showing disrespect to the former president. Following that saga, Shay who later apologised was rumoured to have been taken off the ambassadorial role after she and Kwesi Arthur’s names went conspicuously missing from a list the Agency brought out.However, the Agency later denied taking her out and she looks to have learnt from her lesson.