Wanlov reacts to rumours he is dating Lydia Forson 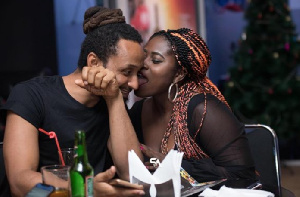 Controversial musician, Wanlov the Kubolor and actress Lydia Forson have been rumoured to be dating for sometime now.They have been spotted together at events sparking chitchats that they are seeing each other.At a public event in January this year, they were seen caressing and playing in a manner which showed there could be something going on between them.As the rumours pile up, the musician told Mamavi Owusu-Aboagye on the Cosmopolitan Mix on Joy FM that “We are cool.”She probed further: “What kind of cool is that?”Wanlov responded, “Sometimes I lick her…,” he said but was quick to clarify that “sometimes I lick her ear.”“We hang out and we are friends,” he responded to the question whether they are dating.When Mamavi quipped further “in what kind of way?” he responded, “In an ear licking way.”