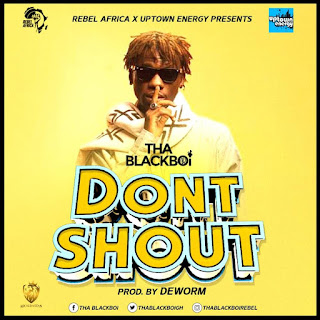 Thablackboi is set to release his much anticipated  hit single dubbed Don’t Shout on 10th July,  which have been waiting for so long by his fans tipped to be the street anthem across the nation and beyond. The song was produced by magic hands Deworm Beat which according to Freddie manager of Thablackboi the remix of Don’t Shout is ready to be dropped two weeks after releasing the single with a video. He gave a clue on artist on the remix which if I may guess right Tulenkey,Eddy Khae and a surprise artist are all on it . The project is powered by the management team Richrastas Promotions-Rebel Africa and supported by Uptown Energy Records.  Be ready to update your playlist as the New street anthem drops.