Shatta Wale performs till 7am at Loud In Bukom 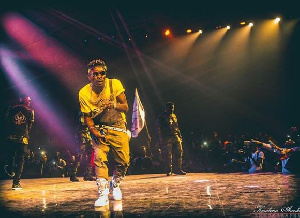 Self-acclaimed Dancehall King, Shatta Wale staged a breathtaking performance at Loud In Bukom as he kept fans on their feet till almost 7:00am Sunday.The show had started on Saturday night at the Bukom Square and featured several other artistes.But it starred Tinny, the godfather of Shatta Wale.After a number of performances, the multiple award-winning artiste, who recently featured in Beyonce’s Already song, took to the stage and treated fans to most of his songs.He mounted the stage a few minutes past 3:00am and had to be persuaded to end the show to allow fans go back home.The concert was dubbed ‘Father and Son’ or Wale and Ale to commemorate the relationship between Tinny (the father) and Shatta Wale (the son).Shatta Wale did not miss the opportunity while on stage to praise godfather Tinny.The concert was to celebrate Ga Mashie.