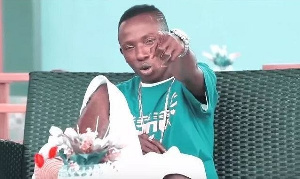 Have you ever wondered what popular Twitter meme ‘sco pa tu mana’ or ‘sco pa tu manaa’ mean? And have you also wondered how and where it comes from?Well, for starters, the popular phrase, which has become a global meme, emanates from Ghana, West Africa.The phrase comes from a verse hiplife musician Patapaa delivered on the viral song “Daavi Ne Ba” by Volta Region-based musician Kawoula Biov which was released in April 2019.The fast-tempo afrobeats jam exploded on the internet after Nigerian musician Mr Eazi uploaded Patapaa’s verse in the music video onto his Instagram page with the caption: “The price just shot up” (he later deleted the post). Other Ghanaian bloggers followed the suit; Twitter and Facebook users did the same, and the song blew up in seconds.This was followed by a viral challenge called ‘Skopatumanachallenge’ where participants filmed themselves rapping to Patapaa’s verse and shared the videos across social media. Thousands of such videos flooded the Internet, especially Instagram.A few months later, some Ghanaian Twitter users decided to use the phrase as a meme on the micro-blog.Twitter user MercedesSlimBoy was the first person who turned the challenge into a viral meme.He did so by tweeting ‘sco pa tu manaa’ next to a snapshot showing a sign that promoted the religious services of a church in Ghana.

Previous Iwan – Bad Like Shango (Prod. by Iwan)
Next You are a fool – Shatta Wale jabs 4Syte TV CEO