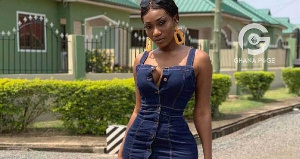 RuffTown Records Signee Wendy Addo Shay has finally revealed the kind of man she would like to spend her life with.According to her, celebrated Ghanaian rapper, Sarkodie is qualified to be the kind of man to she would go out with.Her declaration came after she was asked by a fan why was chasing a married man in the industry (Sarkodie).She responded by debunking all rumours of an amorous affair with him stating that her relationship with Sarkodie was purely professional and that she admired his hardwork, diligence and craft and those are the qualities she looks out for in a man.When asked if he weren’t married, would she consider dating him, she jokingly revealed that indeed she wouldn’t hesitate to be romantically involved with him.