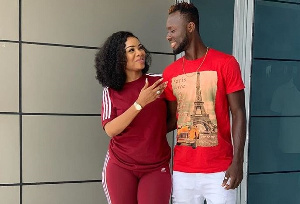 TV star Serwaa Amihere and Black Stars forward Kwabena Owusu have caused a stir on social media with their latest close photo. YEN.com.gh has sighted a photo of Serwaa and Owusu enjoying each other’s company. In the photo, the two looked gorgeous as they wore beautiful smiles and they were staring at each other’s face.YEN.com.gh understands that, the photo was taken right after Serwaa’s show The Cheers on GHone TV on Saturday, July 27, 2019. Owusu’s caption of the photo read, “@serwaaamihere It was nice hosting me in your show.” @jaguar_ahead commented: “champiooons , when are u guyz going back to Egypt.”@silence5428 also wrote: “The meat pie nice ruff.” @regina.ofori.142: “That look tho.” @lutiongh: “King @owusuk11 abeg dash me ur sneakers err plz I love them.” @scanty_gee: “big up boy.” Owusu was part of the Black Stars team that failed to end the country’s trophy drought at the 2019 AFCON after losing their round of 16 game to Tunisia. Owusu currently plies his trade in the Spanish Laliga for Leganese.