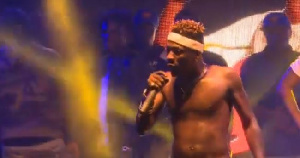 Controversial dancehall artiste Shatta Wale has urged his fans not to fight the police whenever they are caught smoking weed.He noted that any attempt to tussle with the police in such a situation will rather call for unfair treatment.Speaking to him teeming fans at the Loud in Bukom concert held at the Bukom Square on Saturday, Shatta Wale urged them to emulate his lifestyle by being humble and always show respect.Speaking in Ga, he advised that if they are smoking weed and the police arrests any of them, he or she should beg and ask for forgiveness promising that they will not smoke there again.The ‘My Level’ hitmaker assured that they will be released by the police if they beg but they will be slapped if they try to wrangle with the police.Using himself as an example, Shatta Wale said whenever he is smoking weed and the police show up, he admits to them that he is ‘fine’ [high].The police, he claims, encourage him to continue smoking the weed without arresting him.

Previous Shatta Wale performs till 7am at Loud In Bukom
Next I’m not into boys, I love girls – Ghanaian female musician