The rapper, Cabum, has disclosed how unhappy he feels when his name is missing from the best rapper of the year nominees list for the Ghana Music Awards.
The rapper, who was speaking on the Kasahari Level on Adom FM with Pope Skinny, said although he is not happy about the issue, he has grown accustomed to it.
He said while he is not getting any nomination, some people have their own way of defining who the best rapper is.
“It’s a normal thing because everybody has their own best rapper… So, in a way I feel bad and in another way too I don’t,” he told Pope Skinny.
Women
The ‘Chedeshi State label artiste revealed that he prefers dating light skinned ladies to dark ones.
“I don’t often have sex but anytime I want to I prefer fair ladies to the dark ones,” he stated.
Career When asked why he chose music ahead of any other profession, Cabum stated that he had wanted to be a radio personality but he couldn’t get the opportunity.
Nevertheless, the rapper said he loves what he does.
Father’s legacy
He revealed there have been calls for him to do remixes of songs of his father, Alhaji K. Frimpong of ‘Kyenkyen Bi Adi Mawu’ fame.
“Lots of people have been asking me to do a remix of my dad’s songs but I believe it’s time for me to do my own thing. Its destiny, he had his and I have mine so I have to do my thing my own way.”
He, however, added that, he will grant that request after he has built a strong career for himself.
Cabum is set to launch his highly anticipated debut album titled ‘The Beginning’ on May 26 at the Vienna City in Accra. 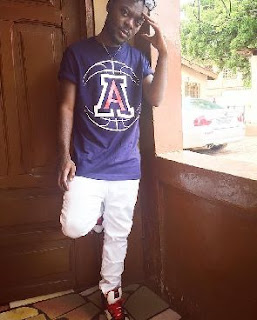